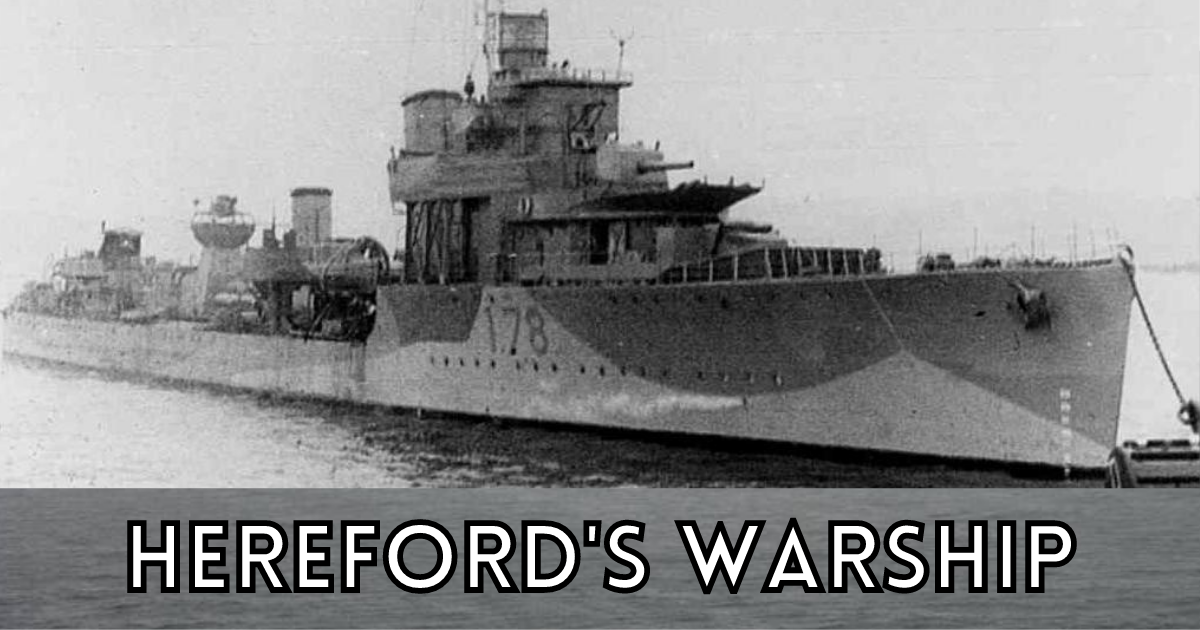 In 1941 & 1942 ‘Warship Weeks’ were organised in cities and towns across the UK. The goal was to raise money to help the Country build more ships, ranging from small boats to massive warships. If they succeeded, the community would adopt one of the UK’s warships as representing their town. This was all to help the war effort, and it created a great bond between the public and the navy fighting for the Country.

Herefordshire held their Warship Weeks from 29th November to 6th December in 1941 and the public set about donating money to held fund the construction of new ships. The communities competing to raise the most money were; Hereford, Bromyard, Kington, Leominster, Ross-on-Wye, Bredwardine & Dore, and Weobley.

Competition was friendly but fierce between towns to see who could raise the most money. In the end, Hereford raised £253,499 and was able to fund the Destroyer Class Warship; ‘HMS Volunteer’. Ross-on-Wye came in second, funding the Minesweeper Class Ship ‘Ross’. Leominster was close on their tail, raising £128,146 for the Minesweeper Class Ship ‘Fitzroy’. Fourth was Bromyard, reaching £125,000 and funding the Destroyer Class Warship ‘HMS Vivien’. Then came Kington, funding £59,393 for the Corvette Class Ship ‘Gentian’. In sixth, Weobley raised £38,378 for the Motor Launch ‘HM ML 105’. And following up, Bredwardine & Dore funded £27,047 for the Motor Launch ‘HM ML 102’.

You have to bear in mind the populations of each of these communities when tallying up the numbers, but overall Herefordshire raised a significant amount, beating the targets set by the admiralty!

Today, the adoption of ships is almost completely forgotten about, but these are the warships which helped secure the UK in future endeavours. We should all be proud to be a part of a community which was so generous and supportive of the Country in those struggles of the past. This year is the 80th anniversary of the holding of Warship Week in Herefordshire, and we salute all those who aided in the fund-raising process, as well as the crews which manned the warships as they set about their campaigns.

Hereford was given a plaque to mark the adoption of HMS Volunteer, which now hangs in the Mayor’s Parlour. History has scattered much of the information about the other adoptions, as well as many of the details surrounding the fund-raising.

Of HMS Volunteer; the warship saw plenty of action during World War II, and traversed the seas on numerous campaigns. She was mostly utilised as a convoy support, escorting important vessels and protecting the waters from invading attacks. HMS Volunteer was attacked numerous times by German U-boats, but managed to survive until the end of the war. In the end, the warship was decommissioned and scrapped in 1947, after many years spent supporting the allies’ war efforts.

It’s fascinating to unearth the forgotten history of our County, and we hope that over time Herefordshire can once again recognise this incredible story of how our community helped the Country as a whole.

For more information on Warship Week, and the HMS Volunteer, visit here.