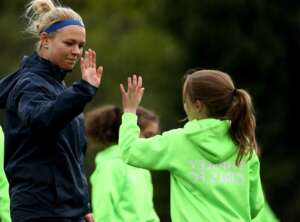 Hereford City Council approved a grant of £3,000 for Herefordshire Football Association, which will help kick-start the ‘Talking Football’ project to capture people’s enthusiasm for the game and tackle social problems such as loneliness and isolation.

Herefordshire Football Association’s goals are to develop, promote and support football in Herefordshire, and they organise and administer competitions, leagues and cups for their clubs. They help to grow participation, educate coaches and referees, provide help and advice and much more.

The grant will enable Herefordshire FA to roll out their ambitious Talking Football project across the county, giving our residents access to some fantastic initiatives such as walking football, disability football, and educational workshops. The programme hopes to help ease some of the isolation issues which so many have been facing over the course of the last year.

The main costs covered by the grant include the use of the pitch for activities, and rooms with additional training materials. The National FA do not appear to be supporting projects like this at current due to a substantial drop in revenues, and are in fact cutting off subsidies to County FA’s when they are most needed.

Especially in a time when many are feeling cut-off from the world, this project appeared hugely beneficial to local people, and because the project is compatible with current Covid-19 restrictions, it can commence even quicker. City Councillors therefore agreed to the grant of £3,000. 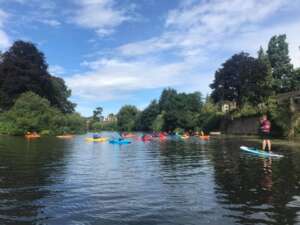 Hereford City Council approved a grant of £1,510.38 for Hereford Canoe Club, which will go towards purchasing another two canoes for use of the club’s members.

Hereford Youth Canoe Club is a voluntary club providing boat-loads of positive paddle-sport opportunities for the young people of Herefordshire.

Vic Gamage, representing the Canoe Club, explained to City Councillors that the application covered the costs of two canoes large enough for their teenage members; the existing canoes simply cannot support the members and larger ones are needed.

The Canoe Club has unfortunately lost much of their income over the last year due to the Covid-19 restrictions which have been in place, and so assistance was needed to cater to their members. Like many of our Youth Clubs, the Canoe Club has been fighting against the tide of uncertainty which the Coronavirus Pandemic has brought about.

Mayor Kath Hey expressed her appreciation for the work the Youth Canoe Club does, and the importance of encouraging young people to undertake outdoor exercise and activity. City Councillors unanimously agreed to grant £1,510.38 for the purchase of two large canoes as stated in the application. 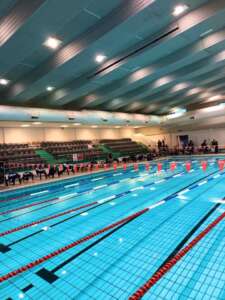 City of Hereford Swimming Club is Herefordshire’s Premier competitive swimming club, boasting swimmers at county, regional and national level. They cater for all levels of swimmers, both competitive and non-competitive, and strive to give every member an opportunity to be the best they can be.

Sandra Gough and Patrick Blake represented the Swimming Club and explained that the application would cover the costs needed to install permanent starting blocks at the swimming pool so that once repairs and works are completed – following the previous flood damage – the venue can be used for major events which the club will host.

These events often draw large crowds and raise money for the club, helping to increase interest in competitive swimming as a healthy and fun form of exercise for all to enjoy. The club hopes these events cause a big splash, starting from November 2021. The blocks presented in the quote are slightly more durable than cheaper versions, which will prove to be more economical and long-lasting in the future.

Membership for the club has sank from around 230 members to 148 at present, and so the club hopes to renew activity by having the appropriate equipment in place when Covid-19 restrictions are eased.

City Councillors noted that swimming is not only a great form of exercise, but also a vital life skill and should be supported in our City. It was therefore unanimously agreed by City Councillors to grant City of Hereford Swimming Club £3,000. 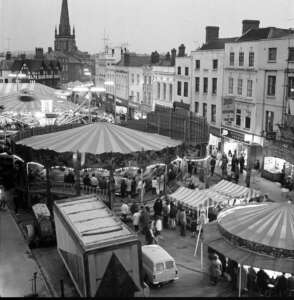 Hereford City Council approved a grant of £2,000 for Catcher Media Social CIC, which will go towards their celebration of the Mayfair’s 900th anniversary.

Rick and Julia Goldsmith, representing Catcher Media, presented some of the archive material surrounding the Fair going all the way back to the invention of photography, and referred City Councillors to their previous projects, such as ‘Life Through A Lens’, which shows how Herefordshire’s history has been captured throughout the ages.

The 900th Anniversary of the Mayfair is an historical moment for Herefordshire and would, under usual circumstances, be celebrated with all the enthusiasm it deserves. However, it is still currently unknown as to whether the Mayfair will be able to be traditionally held in 2021 due to the Covid-19 Pandemic. At present, there is no certainty that restrictions will be eased to a point where physical participation is going ahead.

Though Catcher Media has no influence over whether the Mayfair occurs this year, there is still a huge cause to celebrate in some fashion the 900 years previous in which the Mayfair has brought entertainment to Herefordshire. In fact, should the Fair be cancelled there is even more reason to mark the 900th anniversary and not let it slip by unnoticed.

Catcher Media proposed to City Councillors an outdoor exhibition of historic images and footage featuring the Mayfair, in line with Covid-19 restrictions. This would give a greater awareness and interest of local history, and given Catcher Media’s fantastic work in the past to celebrate Herefordshire’s rich history, City Councillors agreed that a virtual open-air exhibition was an excellent initiative to support.

It was therefore unanimously agreed that £2,000 be awarded to Catcher Media Social CIC for their Hereford Mayfair 900 project.

And for more information on the history of the Mayfair, visit: www.herefordcitycouncil.gov.uk/may-fair