Yesterday (14th July) was Jean O’Donnell’s 90th birthday, and to celebrate her numerous contributions to the City of Hereford, she was awarded Freedom of the City. Mayor of Hereford Mark Dykes attended the afternoon, along with many of Jean’s friends and colleagues from over the years, at Castle House in Hereford. 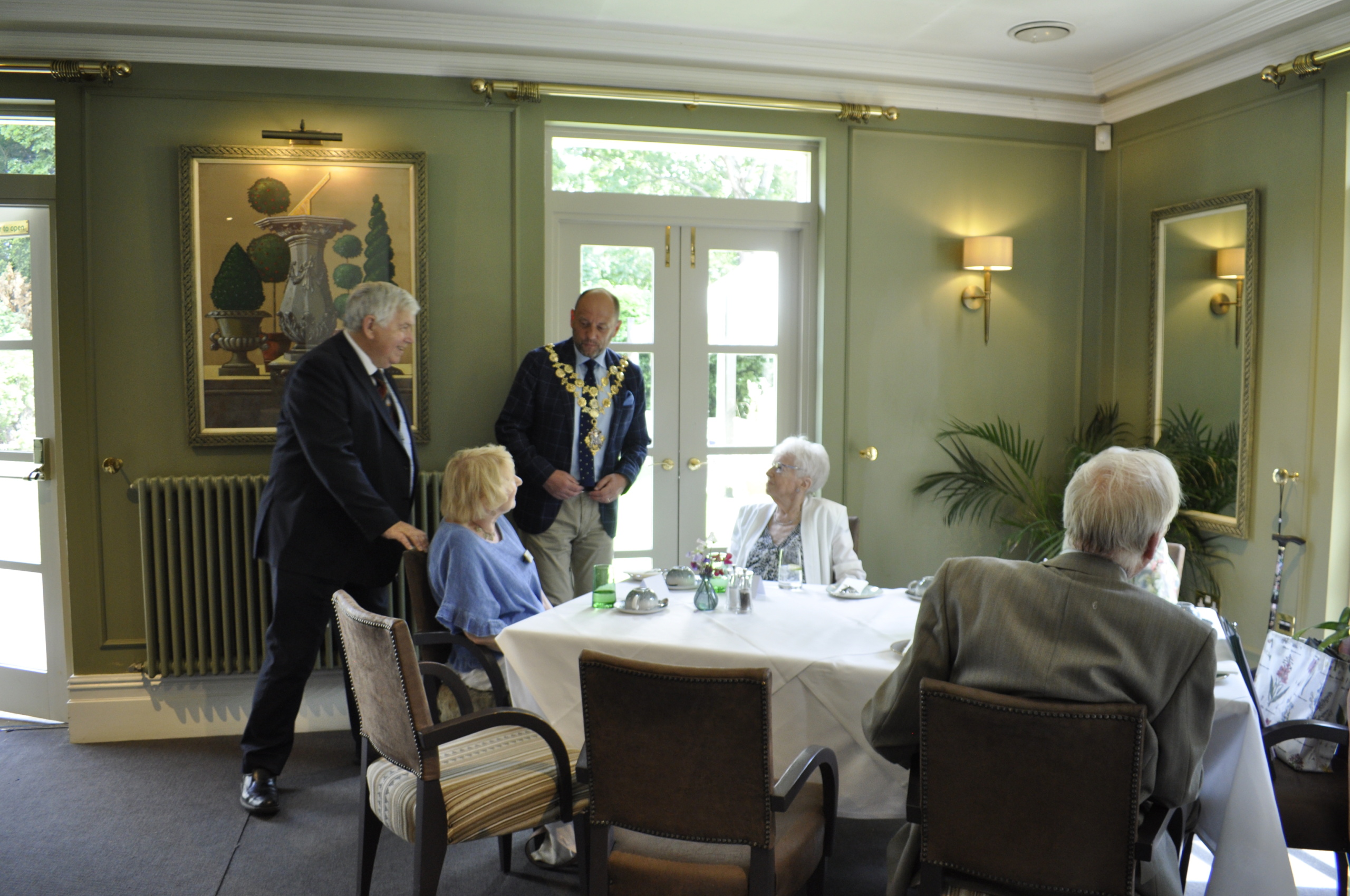 As the founder of the Guild of Guides, Jean has had immense impact on the cultural life and tourism of the City, and has been a passionate guide herself for those who wish to explore our City in detail.

Her full story can be read here, from “Jean O’Donnell – An Appreciation” by members of the WEA during their centenary year:

Jean joined her first class at Harrow (on the local history of Stanmore) when she was just 16 – and even at that age so obviously responsible that she was put in charge of the book-box.  Courses then were more demanding than now and could certainly be longer for it was a three-year WEA course in English Literature which she completed after College of Education. Soon after she and Dennis were married in 1955 (and it was the WEA that indirectly brought them together), they went to live in South Godstone, in Surrey.  At Godstone Jean organised a WEA Branch where Art History, Economics and Comparative Religion classes were both welcomed and well supported.  Among those attending were Mary and Colin Flood Page.  When the Flood Pages moved to Herefordshire years later, finding Jean and Dennis in Hereford was “one of the attractions of the area”.  Many WEA members will remember Colin, who was an active committee member of the Hereford Branch until his death.

When Dennis was appointed a headmaster at Bromyard in 1960 they moved to Hereford, where Jean immediately joined the local WEA, working with the then Tutor-Organiser, Frank Noble.  When their two children started school Jean taught at Trinity Junior School for some years and later taught part-time at the Technical College; then somehow found time to study for an Open University BA – and not content with one qualification added a Diploma in English Studies at Cardiff.  Some years later, in 1976, when the post of Tutor-Organiser became vacant it was offered to Jean and she accepted.  The appointment required her to support the work of the WEA throughout Herefordshire and South Shropshire – a tough assignment which meant a great deal of travelling.  She also took part in Council meetings and conferences in the WEA regional headquarters at Birmingham – old stagers there have written with enthusiasm about her contribution and with admiration for all she did for the WEA in this area.

Jean flung herself into the job of Tutor-Organiser, initially lecturing four evenings a week, and stimulating all sorts of initiatives.  She organised the Branch programme, taught some of the history and literature courses herself and found tutors for a whole variety of subjects.  Doubtless it was the case then, as it is now, that when Jean’s name was listed as tutor the number of students enrolling for the course was notably higher than usual. Jean also organised many outings to such places of interest as Bath for costumes, the Welsh Folk Museum and Atlantic College, the art galleries at Birmingham and Walsall, and last year Cardiff Bay, sallying out with a wealth of information with which to enrich the visit for everyone.  They invariably ran like clockwork, as members past and present can testify – and she never lost anyone either!  Jean’s knowledge of Herefordshire churches is exceptional – in the early 1980s one of her most popular offerings, ‘Thirst After Righteousness’, was structured round a visit to a church followed by a visit to the local pub – and it wasn’t just the slaking of the thirst that made them popular!  These tutored tours were always enhanced by a written commentary and wonderfully detailed drawings.

Some of the courses which Jean set up covered ground that would seem unfamiliar today, courses for the unemployed, for example, and classes offering training for Play Group organisers and assistants, subjects now incorporated in official government schemes.  Jean also encouraged and supported many village history groups.  She not only lectured to such groups all over Herefordshire, but she was prime mover in bringing together the county’s local history societies in an annual conference – the ‘Local History Day’ – inaugurated in 1978 and still a highly successful gathering with talks by notable historians and archaeologists and explorations of churches, castles or houses near the host centre.

Nor was this all.  In the early 1970s Jean was invited by a small local history group at Ewyas Harold, then meeting in the homes of its founder-organisers, to attend their committees and help them secure speakers and organise programmes.  One outcome was the formation in June 1977 of a still-flourishing WEA branch there.  Another outcome, this time of a course on ‘The Past Around Us’ she held in the viIIage, was the production of a series of Ewyas Harold-centered historical pamphlets.  A similar group of local history enthusiasts, organised from the village shop in Lugwardine, in 1986 found Jean through the WEA as a lecturer.  Inspired by her they organised further history courses and later went on to write up themes they had studied in an excellent illustrated book ‘Lugwardine in the Nineteenth Century’.  Their Winter Lecture series in association with Hereford WEA has continued to this day.

In 1980 Jean asked the then Mayor of Hereford, Mary Bew, for her moral support in creating a Guild of Tourist Guides to help visitors enjoy the historic city and so boost tourism.  Jean drew upon members of her local history class to be trained as the first of many batches of volunteer guides.  Thereafter she regularly ran WEA classes on historic Hereford, mainly to train further city guides but open also for others who, though unable to commit themselves to being guides, were eager to learn about the city’s past.  (For one such student, newly retired to Hereford, the course provided not only a fund of insights into Hereford’s past but a wide circle of welcoming friends within the WEA.)

Jean herself has always taken her turn in acting as a guide to the many parties who come to the city between May and September and she infects each successive group with her own enthusiasm, as though she herself had only just discovered the city’s fascinating history, so that they too see the city with fresh eyes.

She also conveys her passion for preservation and sensitive urban development and remains unstinting of her time, expertise and energy when supporting a worthwhile cause.  In the late 1960s the Hereford WEA and the Hereford City Excavations were jointly involved (and consequently so was Jean) in the City Defences Excavation Project.  She spent many hours excavating the city walls and together with Frank Noble helped to raise interest in and so helped to preserve the city walls we see as we drive or walk round Hereford.  The Offa’s Dyke Footpath was another shared pioneering interest at this time with WEA walks on Sundays.  Forty years on she is at the very heart of the campaign to preserve another major element in the city’s heritage, Churchill House museum and art gallery.  She serves on the Hereford Conservation Area Advisory Committee and on the Library Users’ Committee, knowing full well how important access to a good library is to the work of the WEA, and she has twice been President of the Woolhope Club.  When one adds that currently she is writing a book on John Venn one cannot but ask ‘How does she do it?’

The fund of knowledge about the city and its people, the county and the running of the WEA that Jean has acquired over the years has proved invaluable to our branch committee.  Many times, through her contacts and involvements, she has found us influential or well-known figures to speak when we had some special occasion to mark.  (Helped perhaps by her “smiling face and persuasive powers” as one tutor put it?)  But day in, day out those of us who have served on the committee have found Jean ready with help and advice, never dictating how things should be done, even though surely often tempted to do so.

We give our wholehearted congratulations to Jean for her award, and salute her incredible passion for history and the City of Hereford.