5 of the most iconic buildings in Hereford

Hereford is brimming with iconic architecture ranging from hundreds of years in the past to highly modern developments. The City is famed for its preserved heritage, and in recent years newer construction has added cutting edge designs into the mix, making Hereford a destination where you could well get lost just looking at the buildings!

Here are five of some of our favourite buildings around the City, prized for their unique architecture. 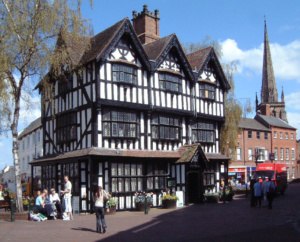 The Black and White House

Hard to miss as you stroll through High Town, this perfectly preserved 400-year-old building stands alone as a relic of ages past. Named after its classic black and white wooden façade, ‘The Old House’ (as it is otherwise called) has witnessed the changing shape of High Town throughout the years; it’s been used as a residence, a shop, a market and even a bank. Today, it serves the City as a museum and an insight into what 17th Century might have looked like. The resident ‘Hereford Bull’ just outside was a more recent addition, giving the centre of Hereford a view of the animal bearing its namesake. 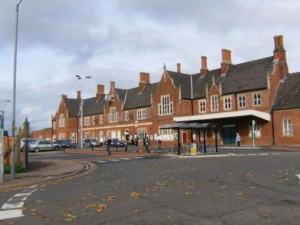 If you visit Hereford by train you’re sure to be impressed by the classic and imposing Victorian architecture of Hereford Train Station. Opened in 1853, the station is unique in design, possessing a series of grand spire-like chimneys, gothic windows and red-brick façade. Not only is this building a fantastic gateway to Hereford, it’s also a reminder of Hereford’s industrious past. Unlike many other stations throughout the Country, Hereford Station has had little modernisation to its aesthetic build, but it still serves as a bustling travel hub. If you’re lucky you might even see a steam train pass through! 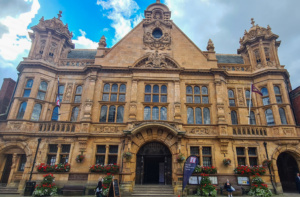 Home to the Tourist Information Centre itself, Hereford Town Hall is one of our City’s grandest structures. Built in 1902, Hereford Town Hall is a beacon of local tradition and history, housing the Mayor’s Parlour, the City’s historic silver, the City swords and many more relics of the past! Built in unmistakable Edwardian fashion, Town Hall has all the gravitas you’d expect of a place originally designed to act as the seat of Hereford’s most honourable citizens. The Town Hall is free to enter, and a fantastic place to pop in to get more information on your visits to Hereford. 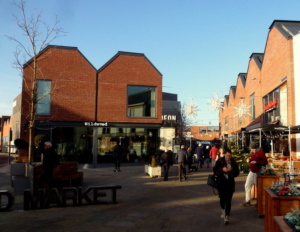 The most modern of our picks, this recent addition to Hereford may not seem special at first. Granted, it’s sleek and modern, but the inspiration for its design is more than meets the eye! Built on the former grounds of the Hereford Cattle Market, which was once the focal point for livestock trading in the County, it was eventually demolished to make way for a contemporary shopping district. To pay homage to the landmark that stood before it, New Market was designed to reflect the Cattle Market’s structure, with a bespoke pointed roof. That this building mirrors the past as well as serves as a fantastic shopping centre is well worth recognising! 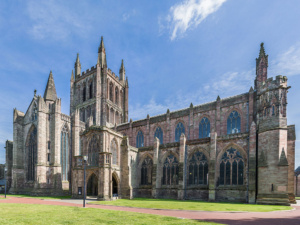 How could we not include one of Hereford’s oldest and most prominent landmarks? Construction began in 1079 and was finally completed in 1250, making it a truly ancient treasure. Housed within the gothic spires and arches is the fabled Mappa Mundi, a medieval map of the world as it was known in 1300, which is regarded as one Hereford’s most famous relics. The Cathedral is also home to the largest library of chained books in the world, as well as many other historical artifacts. This truly is a landmark that’s needed to be seen in person to be experienced in fullest; putting the sheer size and scope of the Cathedral into words is an impossible feat!

These are just a few of our favourite buildings around Hereford, but of course there’s plenty more to see! If you need guidance or want to know more about our City, then contact the Tourist Information Centre here.